As I touched on in my previous blog post, Vault is an enterprise grade centralised secret management platform.  Companies have different reasons that motivate them to use such a platform.  For example, some companies may choose to use it just for general secret storage.  Other companies may choose to use Vault to utilise the Secrets access audit logs.  This feature can be valuable for audit and compliance purposes.

Another reason why a company may decide to use a solution such as Vault is to make use of it’s ability to encrypt and decrypt data stored in different locations.  This feature means that application have the ability to encrypt its data without changing its primary storage location.

There is also a dynamic secrets feature built with Vault which is very useful when running scripts.  This feature gives the user the ability to generate access keys which remain valid for the duration of the script which are then revoked. This feature enables automation whilst addressing common concerns raised by Corporate Security teams.

Whatever reasons you have for using Vault, it is a great solution and we here at Storage Made Easy are thrilled about the integration between our two products.

Let’s now look at the steps we need to take to install and configure your Vault instance in preparation for the integration between your two instances.

We will be installing our Vault instance on a CentOS7 server using the minimal edition, as such, you will need to install wget and unzip if not already installed on your server as prerequisite.  To do this run the following command.

Now that we have  installed the pre-requisetes, we are ready to proceed.

The first step is to download Vault from the Hashicorp website.  To achieve this, run the following command.

This will download a zip file which contains the Vault application. We now need to unzip the file.  We can achieve this by running the following command

The binaries contained within this file is all that is required at this stage to run vault; however we now need to add it to our ~/ .profile file by entering the following command:

Let’s now add a symlink to the binaries.  We will first need to move to the /usr/bin directory before adding the symlink

You should see the following output if you have installed vault correctly. 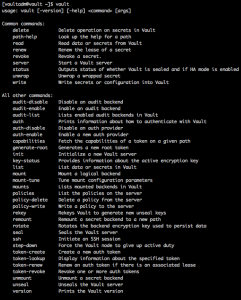 The next step is to generate a self-signed certificate and key.

We now need to sign the certificate using the following command

For more information about using certificates with Vault, check this blog https://dunne.io/vault-and-self-signed-ssl-certificates

We are now ready to start configuring our Vault server.  Create a configuration file, we’ll call our file vault.hcl.  Copy the following contents to the newly created file, changing the path of the key file and cert file to the location of your key and cert files respectively.

This hcl file is only configuring the most basic things for your vault instance.  There are other parameters that can also be configured; however, that goes beyond the scope of this tutorial.  If you would like to know more about the other parameters, check out this tutorial by Hashicorp https://www.vaultproject.io/docs/configuration/index.html

we now need to download and install consul by running the following command.

We will also need to add the consul binaries to our ~/ .profile file much like we did for the Vault binaries.

We can now start the consul agent by running the following command.

Now that we have the consul agent running, we can now start the vault server.  To do this, we’ll need to open a new ssh session to the server and enter the following.

N.B when using the -config flag you will need to change the value to the name of your config file

After we have started the server, we should see output in the terminal like the below.

This confirms that our vault server has now started.  We are now ready to initialise the server by running the following command.

You will see a series of encryption keys generated much like the following example provided by Hashicorp.

This brings us to the final step of deploying a Vault server. We will now need to show the vault server how to decrypt data by using the unseal command.  You will need to unseal 3 out of the 5 keys generated.

Enter the key when you see the following message appear

You now have a vault server that is ready for your production environment.

This concludes our tutorial for deploying a Vault server into your estate and I hope you have enjoyed this and found it useful.