You can however choose to use other Mac clients to connect to the Cloud Providers that you have mapped to the SME Gateway. We highlighted Forklift as such a client in a prior post, and you can also choose to use Transmit from Panic.

Once you have CloudDav enabled you can choose to access your clouds, mapped via the SME Gateway, through Transmit. First choose to connect over WebDav as in the screenshot below: 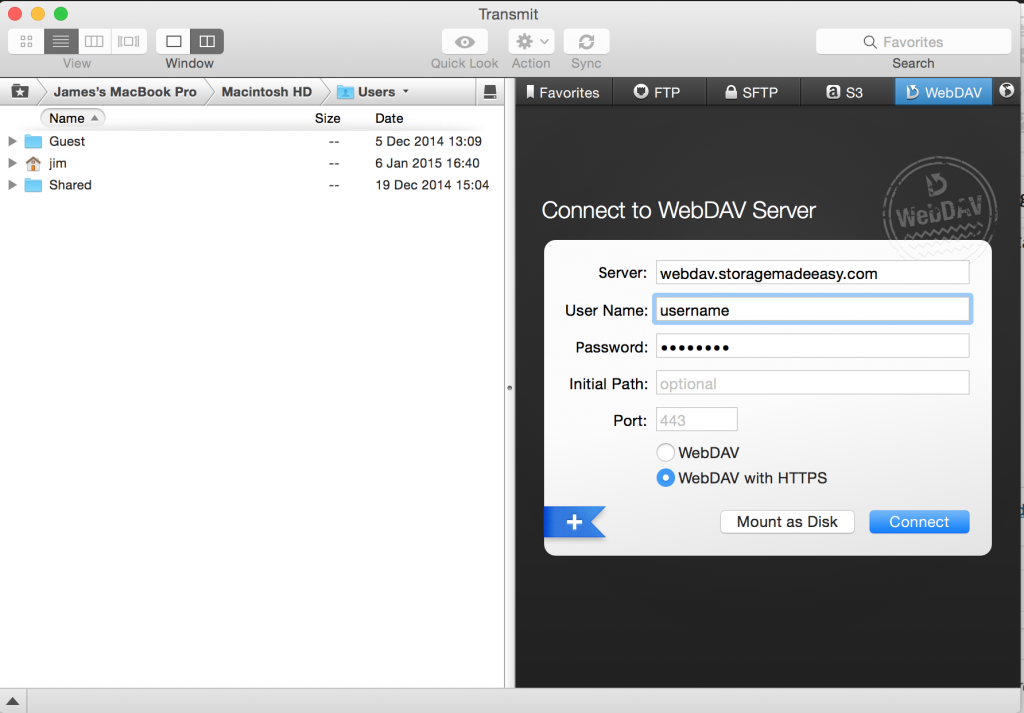 You can then choose to connect directly inside of Transmit or as a Virtual Drive that will appear in Finder. Transmit  also has a very nice sync feature that will sync between folder structures. In this way you can sync files with Transmit and SME from different Cloud Storage Providers to your desktop. The Sync screen after choosing Sync SME CloudDav is available with every account, even free accounts, although on free accounts it is restricted to 150MB of use per month. The CloudDav protocol Adaptor is just one of the protocol adaptors that SME provides, the others being FTP, SFTP and a compatible S3 API. All protocol adaptors are available in the Storage Made Easy Enterprise edition as part of the Cloud Gateway which the SME Enterprise File Share and Sync is built upon.

**This extension is deprecated**

Similar to our Chrome File Explorer extension we blogged about recently, we have now released the same extension for Safari.

You can install it from the SME Clients and Tools page. 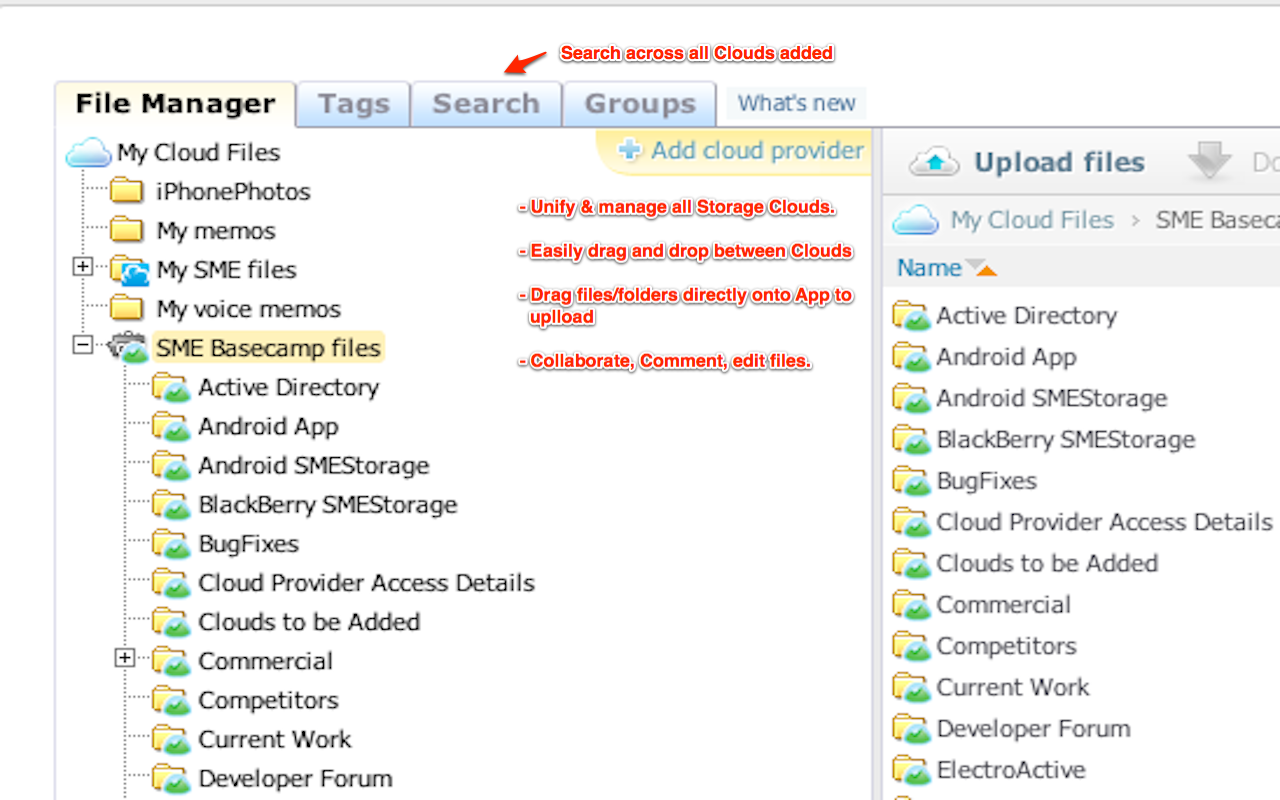 Our Windows 8 optimised Surface RT App has been out for a while now but we thought we should formally introduce it on the blog!

The App is optimised for touch and Windows 8 tablets, although it can be used by an Windows 8 OS.

You can see a brief video overview of the App below:

Remember that the full version of our tools is also Windows 8 ready and it includes a native desktop drive, Sync, Microsoft Office Plug In’s and also Microsoft Outlooks secure link sharing. It is available for Personal Cloud and Business Cloud Users.

We have updated our Android Cloud File Manager application today in Google Play and on our site. The new version adds supports for:

It also features a dedicated settings section where the various App settings are now consolidated. The App also now supports copy and paste between Clouds, an often requested feature.

For a brief overview please check out the video below:

In our previous post we demonstrated how files from one Cloud Storage Provider could be moved or copied to another Cloud Storage provider using Drag and Drop.

We’ve now done some further work to make it easy to also move or copy nested folders from one Cloud Provider to another. Please review the video below for a demonstration:

For over 2 years now we have had the Public Files page. When users sets a file public from any of the 35+ information Clouds they have mapped to their account then it is displayed on this public files page.  Users have always been able to make such files password protected by encrypting the files on upload through our platform, but we have had feedback that what users really wanted was the ability to have any files on this page password protected, whether they were uploaded as encrypted files or not.

We’ve now added this change to the service. To take advantage of it all that needs to be done is to assign a password to the public files page from your Cloud DashBoard after login to the web. This can be set under the “extended options” section (at the bottom of the DashBoard).

Setting files to be public is easy, just right click on the file from the web and choose to make the file public: 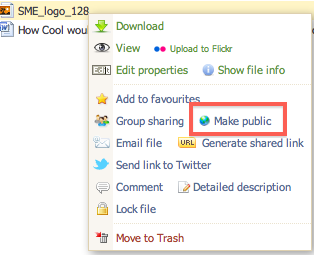 Other desktop and mobile clients also enable files to be set as public, as in the Android example below: 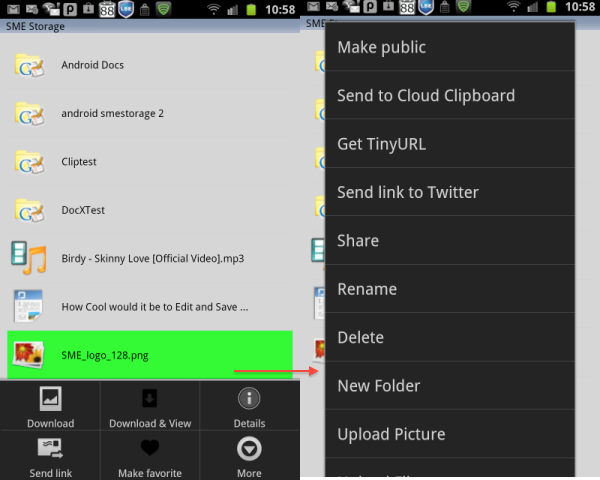 Once files are set public they appear on the public files page that each user account has: 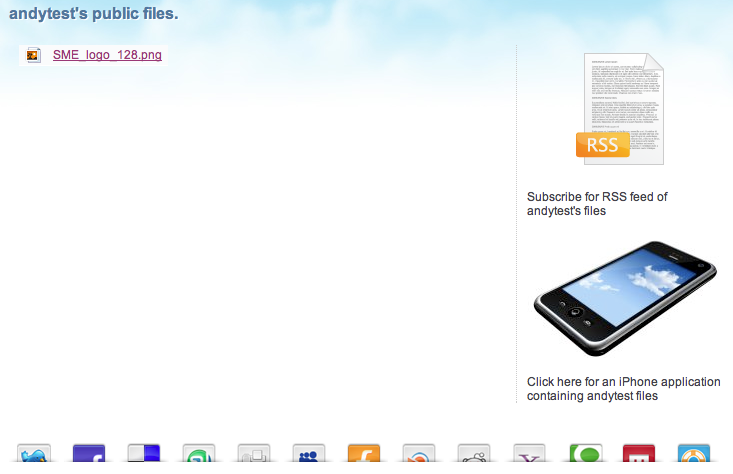 These files are also available as an RSS feed that can added to the foot of an email for example, or as a an iPhone App:

Once a file is then accessed when public file sharing is turned on then the user is redirected to a password page  when they try to access any file from the public files page:

This feature works across files from any Cloud and indeed Cloud Files from different clouds can be shared and protected from the same page in this way.

Business Cloud File Server users can take advantage of this or turn off file sharing completely for their users.

We have done a major update of our Web File Manager today. You may have used our File Manager beta over the last few months. This File Manager has gone live and there are shot of new features that business and individual users can take advantage of. The include:

1. Simplified Layout: The whole File Manager has been simplified. Now the two panes of how files are shown works just as it does not the desktop with files being shown in both panes. Also the menu bar has been vastly simplified to concentrate on the options that are used the most, such as sharing, folder creation, and upload. 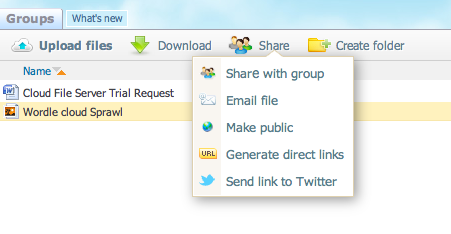 Also all file and folders function has been consolidated on a right click. Right clicking on a file brings up the options for the file, the same with folders: 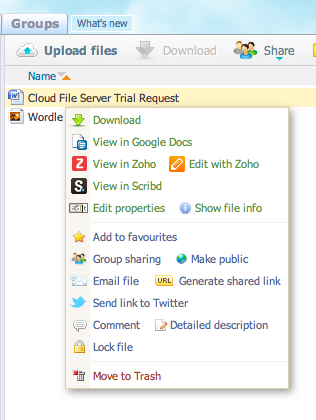 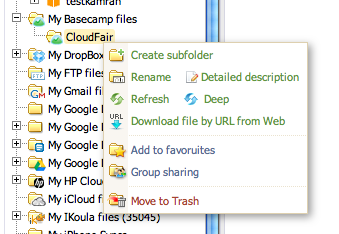 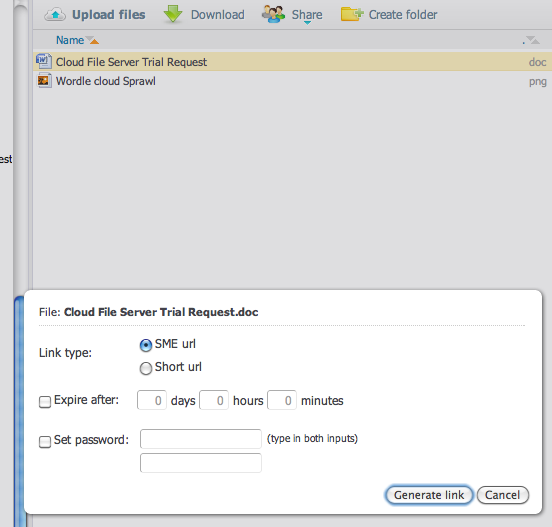 3. Improvements in how to copy and move files between different services: This is as easy as shift and click and then dragging and dropping. Refer to the below video for more details.

This works with folders too, you can drag and drop folders between services easily.

4. Improvements when using a tablet: When using a tablet, the File Manager reacts differently and is optimised for touch screens. Selecting multiple files is just a matter of clicking to the left of the file, and a tick will appear to let you know the file is selected. File options can be done by doing a long touch or press on the file as right click is not applicable on tablets.

We hope you like the new look File Manager. We continue to work on it and have some even further optimisations to come soon !

– Assign lengthy tasks and operations to the SME Platform Tasks Engine (PTE). Use your phone while tasks are completed in background. Check progress at anytime in cloud tasks.

– Advanced Cloud Search feature that can search for files across multiple clouds.

– Unique Direct Upload uploads files from web directly, no need to download and then upload, just enter file address and our servers will upload it in background.

– Open files in the phone in Microsoft Office, MediaPlayer etc.

– Record audio (even with screen locked), take notes and 2-way sync with chosen Cloud(s). No need for another recording App.

– 2-way sync pictures with different Clouds. Integrated with Pictures hub. Pictures can be uploaded (shared) directly from the hub. 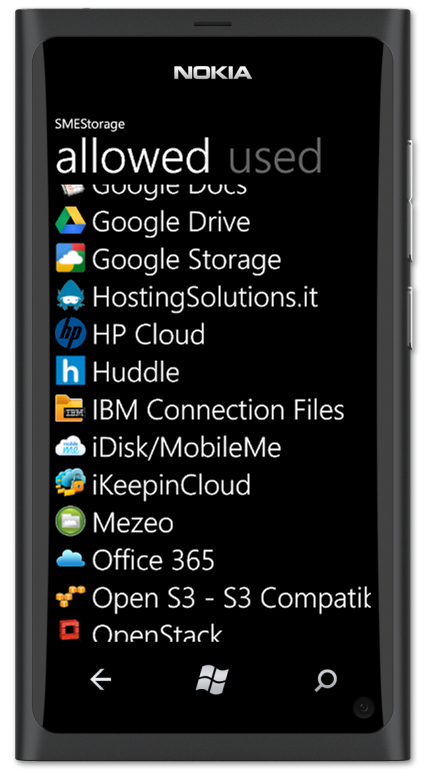 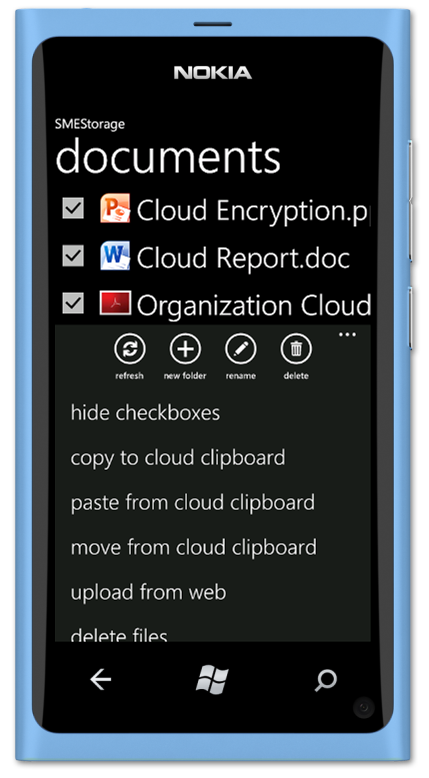 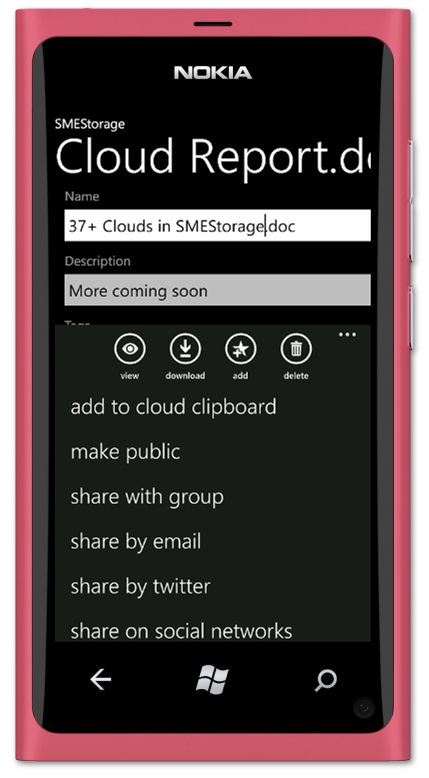 We have seen a recent surge in business customers wanting to use the Windows Phone with our Cloud File Server SaaS and hosted hybrid appliance and expect this to continue with the recently announced windows phone business features.

We’ve updated our Linux Cloud Tools to 3.0.12. The changes include:

1. Supports deleting of files during sync

5. In Explorer new option to upload folder (previously only individual files were possible to upload).

6. Fixed bug with trash in explorer (not all files from trash were displayed)

7. Sync center works as per other OS sync tooling.  The “My syncs” folder concept is not used any more and desktop to different cloud folders can be mapped. ie. any folder can now be nominated for sync.  The free version has a restriction of 3 folders that can be sync’d

8. Encryption now supported (only for Personal Cloud or Business Cloud users.). In the Properties window it is possible to set a password for encryption of files during sync. 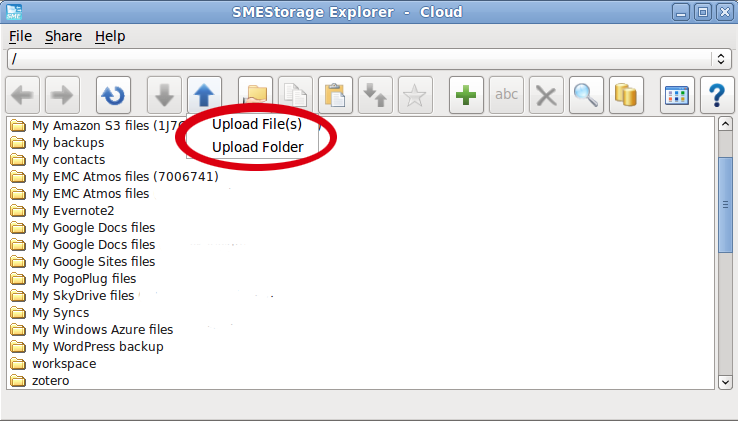 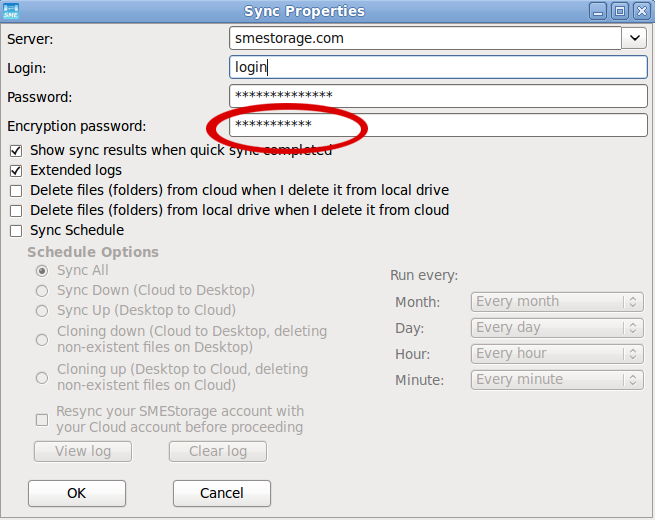 The Linux Cloud Tools can be used with the following Clouds:

The tools can be downloaded from the Linux Cloud Tools Page.

The SMEStorage Multi Cloud WordPress plugin has been updated to version 1.8.

The Plugin enables a WordPress site with tables and content to be backed up to any of over 30 Storage Clouds now supported by the SMEStorage Open Cloud Platform. The latest version of the iSMEStorage Cloud File Manager for iPhone / iPad is now in the App Store. There are a host of new features including a re-designed workflow for easier Cloud Files (and local flies) interactions, a new PDF component that supports large PDF files, and support for OpenStack and Google Sites Clouds.

The below presentation showcases the Cloud File Manager for the iPad:

Support for Windows Mobile 7 has always been on our RoadMap. We view it as a strategic handset client, and we’re happy to say that the App is close to being completed. The screenshots below give an idea of how it will finally look: We hope to have an App in the Windows Marketplace by the beginning of July.